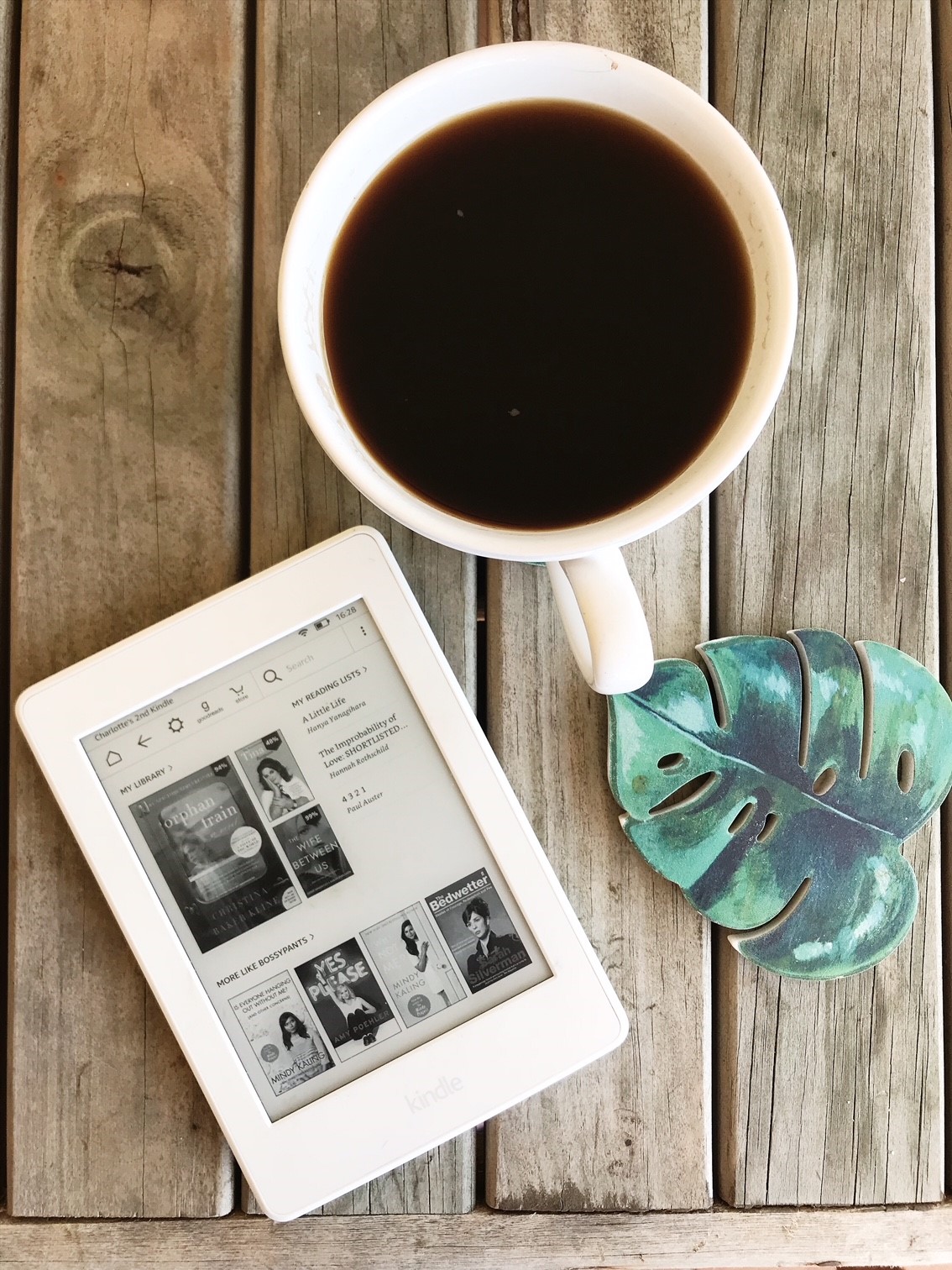 Having an hour long ferry commute daily enables me to get a LOT of reading done. It’s my quality time to switch off and immerse myself in something other than Instagram or Facebook! My reading tastes are pretty eclectic, from best sellers, to book suggestions from friends, or recommendations from kindle, and I am always keen to read whatever I can get my hands on.

I’ve seen so many posts on my social media recently from various friends looking for summer holiday read recommendations, and it got me thinking that I should put up a post with some of my favourites!

So here are my top 10 summer reads! No matter your literary preference, I have tried to include a little bit of everything. Whether you’re a sci-fi nut or a thriller junkie, these are some of the titles you should be taking with you on your holiday! So grab yourself a cup of tea, switch the wifi on your kindle, have a read of these and maybe think about downloading a couple.

I have been running around recommending this book for months! A complete departure from my usual psycho-thrillers and rom-com reads. RPO is set 30 years in the future, a time when the majority of the world’s population is living in abject poverty the planet has been ruined by global warming and the resulting housing crisis means that most are living in the ‘stacks’ – trailers piled precariously on top of each other, twenty or thirty high.

To escape this day-to-day misery everyone is living, learning and working in a high-tech virtual reality existence known as the OASIS – plugged in for days or sometimes weeks on end. OASIS’s creator (think: Steve Jobs) has recently died and left his entire fortune to the one player that can find the secret egg – hidden somewhere in the thousand of planets and kingdoms that make up the OASIS – and now the whole world is looking for it. The resulting scavenger hunt (or egg-hunt) is fast-paced, action-packed and liberally peppered with 80’s pop culture references which kept an 80’s baby like myself endlessly amused. The movie adaptation was released earlier this year and I have been dying to see it!

In the late 1800s and into the start of the 20th century the orphan trains brought thousands of children from large coastal cities, like New York, to small mid-west towns. Often the children of immigrants, theirs was a very uncertain fate. Would they be adopted by a kind family desperate for a child, or taken on by farmers just looking for unpaid labour. The abuse that many of these children suffered was horrific and once re-homed the state abandoned them entirely. The story is told by Vivian Daly, now in her 90s, as she looks back through her journals with troubled teen Molly Ayer, who is committing to community service as a way of keeping herself out of Juvenile Hall. With more in common than maybe either of them realised, this is a story about resilience and finding your own family.

Do you ever wish that you could hit re-do? Atkinson’s novel cleverly explores the theory of multiple lives and reincarnation as protagonist Ursula moves through history living multiple versions of her life and seemingly learning from her mistakes along the way. It opens with Ursula shooting Adolf Hitler in a small cafe in 1930, the SS return fire and darkness falls. Suddenly we’re sent backwards and now back in 1910, the day of Ursula’s birth – but it is short lived, the umbilical cord is wrapped around her neck and the doctor isn’t on hand to assist, darkness quickly falls again. The next time is more successful, the doctor is present and Ursula makes it – at least until she becomes a toddler. From here we embark on a journey through her multiple lives, each one shifting slightly (for her and those around her) as events in the previous life have changed the course.

This was a recent re-read for me and I’m already looking forward to reading it again. The story is beautifully complex and there are small details that you notice each time you read it afresh.

:: The Wife Between Us – Greer Hendricks and Sarah Pekkanen

I felt like this book was similar to others I had read (in particular ‘The Last Mrs Parrish’) but I still think it warrants a mention. Jumping between past and present, Hendricks and Pekkanen tell the story of Vanessa, the ex-wife of the wealthy and charming, but mercurial Richard. But, as with every marriage, you never know what goes on behind closed doors. The picture-perfect life of luxury that she lead while married, was not all that it’s cracked up to be, and there is more to her ex-husband than meets the eye. We assume that she was devastated by the breakdown of her marriage and his subsequent relationship with a younger model. We assume that she is the jealous wife that just can’t seem to let go, but is that really the case? The authors let us believe what we want to – but we should assume nothing. With a couple of plot twists the situation starts to become clearer. Can she stop her young replacement falling into the same trap? Or will history continue to repeat itself?

:: The Couple Next Door – Shari Lapena

I love the way that Amazon suggests other titles. After reading the book above, Amazon had a slew of other psychological thrillers for me to work my way through.

The story starts with the married couple Anne and Marco at a dinner party with their neighbors. They’ve had to leave their baby daughter unaccompanied next door, as the babysitter cancelled – but it’ll be okay, they have the baby monitor and they take it in turns to go back every half hour and check on her. But then the unthinkable happens, they return home at the end of the evening to find her gone.

The police are called and the investigation starts as they pick apart every detail of their lives, family relationships and business dealings. The plot keeps you engaged all the way through, and every time you think you figure out who’s responsible there’s another curve ball. Can you really trust those closest to you?

Moriarty is fast becoming one of my favourite authors, not only because her novels are well-plotted and engrossing but because her characters are so believable!

Big, Little Lies starts with a murder at a school Trivia Night event and then rewinds six months in order to give us the back-story. We don’t know who the murderer is and we don’t even know who was murdered.

The plot follows the lives of three of the school mum’s and covers various subject matters including friendship, marriage, bullying, rape and domestic violence. Each mother brings a different voice to the story with her own individual struggles.

I love how real Moriarty’s characters feel to me, you can instantly identify with them on the basic level, battling their way through the kindergarten cliques and the ‘blonde bob’ brigade. Despite the dark topics the novel is full of humour and light-hearted observations, an excellent balance.

This title from Moriarty was adapted for television by HBO last year, starring Reese Witherspoon and Nicole Kidman – a fantastic adaptation, but is an adaptation ever really better than the book? It will be interesting to see where they take it with Season 2 – since they finished the book in Season 1.

This book could last you all holiday, as it’s a pretty big read. It’s the first novel from, and semi-autobiographical tale of, author Gregory David Roberts who escaped maximum security prison in Australia and went on the run, escaping to Bombay where he tries to disappear in the busy streets, amid the teeming slums and in the midst of the millions of other residents. He learns the language, sets up a medical clinic in the slums, he fights a guerilla war in Afghanistan, stars in Bollywood films and gets tangled with the Bombay mafia. The sights, smells and sounds of India are vividly described as you follow the story of Lin as he lives his life on the run. The colorful characters that he meets along the way; captivating women, loyal friends, slum dwellers, mafia dons, fellow inmates become a part of his story.

This was an excellent recommendation by a close friend and makes an ideal beach read. Short and pithy, a quick and easy read (I finished it in one afternoon), this is life according to Tina Fey. Insights into the improv comedy scene and stories from her childhood sit alongside Fey’s hilarious observations about what it means to be a woman – particularly one that doesn’t fit the typical Hollywood aesthetic. This is guaranteed to have you chuckling out loud. I thoroughly enjoyed every smart, little anecdote.

I’ll preface this by saying that I’m a bit of a Picoult fan – I love the fact that she never shies away from a controversial topic, she takes agonizingly painful subject matter and lays it out unflinchingly. Small Great Things is no different, telling the story of Ruth Jefferson, an African American Labour and Delivery nurse, who ministers aid to the newborn son of a white supremacist couple, against orders, and finds herself facing murder and negligence charges.

Picoult forces us to really examine what it means to be racist today – whether actively or passively, and challenges our cultural perceptions of racial discrimination, of prejudice and privilege.

Book one in a series of four – Ferrante’s novels collectively span almost sixty-years in the lives of protagonists Lila and Elena. My Brilliant Friend covers the early years – from their first meeting as 10-year-olds and into their adolescence. It starts in Naples in the early 1950’s.

Ferrante’s novel is an interesting examination of the intricacies of complicated female relationships. Lila and Elena are very different characters, characters that can either compliment or conflict. Speaking for myself, I feel exceptionally blessed by the incredible support network of girlfriends that I have, but that doesn’t mean to say that it’s always easy. We grow up, we grow apart, we come back together, we feel like we never left, we move through school and college, different jobs, maybe marriage and motherhood, everything changes yet essentially remains the same.

Clearly I am going to have to get stuck into books two, three and four in the series now. Rumors are that an HBO series is coming. 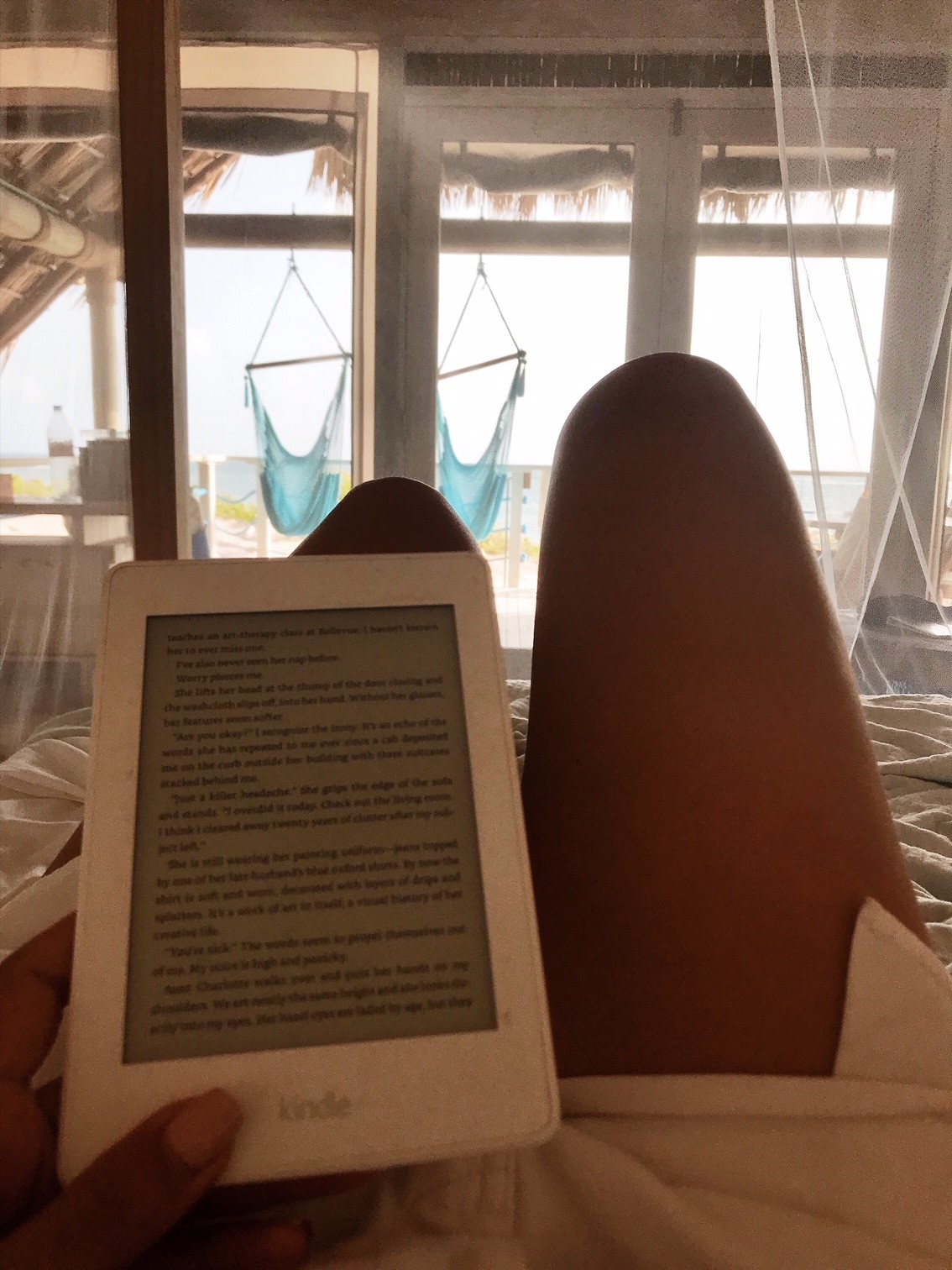 Wow – there are a good few titles there for you to sink your teeth into. Have you read any of them already? What did you think of them? Do you get enough opportunities to relax and read? It’s always one of my favourite parts of my holiday, a few hours guilt-free to just escape into whichever book I’m reading.

One of the other things I love most about my kindle is the cost-effectiveness. Many of the titles listed above are less than $6 when purchased for the kindle, and that’s only marginally more than the cost of a trashy magazine and a coffee at the airport! Did you know that Amazon also offers a Kindle Unlimited membership? You can find out more about it, and even sign up for one free month’s trial, here.

Which one will you try first?